For this week’s South Florida Clothiers South Florida Friday [Fan] Fact we pay homage to Burt Reynolds, who in addition to being the top box office draw of his epoch was perhaps South Florida’s all-time greatest emissary.

Although born in Michigan, Burt and his family moved to South Florida in his 10th year, settling in Riviera Beach where his Army Veteran father rose to become chief of police.

As for Burt, he attended Palm Beach High School, where it took him only until his sophomore season of football to become an All State and All Southern running back.  He parlayed that success into an FSU football scholarship, where he would room with another South Florida football phenom:  Lee “Sunshine Scooter” Corso, the all-star quarterback out of Miami Jackson Senior High School, who now resides in Orlando and hosts ESPN College Gameday.

Injuries shortened Reynold’s football career however, and he returned to South Florida, transferring to Palm Beach Junior College (then in Lake Park).  While there, an English professor directing a play encouraged Burt to give acting a try.  That play earned Burt the 1956 Florida State Drama Award, and the rest is history.

There are just too many connections with South Florida to list without even getting into the movies Burt filmed right here in South Florida… so we’ll just leave you with his first three words when accepting the Film Florida Legends Tourism Ambassador Award a few years ago: “I love Florida.”

South Florida Clothiers: “As Unique And Stylish As The Place We Call Home” 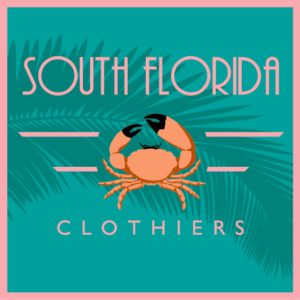